Do you have your healthcare figured out for 2014?  Then you are among the lucky ones!  Let me tell you what happened to me in my adventures to obtain new healthcare in 2014.

We have all heard the complaints about the government website.  Fortunately, I live in a state that is full of techie nerds that seem to have put up a fairly good web page.  In November, I had some trying days with it but without to  much effort, I was enrolled in late November and very happy with my choice.

Unfortunately, the State of Washington interveened in my healthcare choice because they decided, I could not financially afford what the plan was offering for me based on my expected income in 2014!  Now granted, I am still looking for a job and I am attending school full time.  So I loaded my information with what I knew I would have, which wasn’t all that much.

I was bumped out and put on the state plan. Hmmmmmmm.  This complicates life because in January I was planning on doing all my cancer follow up.  One year cancer free and of course the doctors are going to run all the lab tests again, poke and prod and figure out what the next treatment, if any might be.  I passed everything with flying colors and I am feeling great!  So I use the State healthcare plan. Boy if there is discrimination alive and well it is in being on Medicaid.  Although right in the health care information, it says you have the right to be treated with dignity and respect.  THAT should have been my first warning.

My first trip into a medical facility.  “Oh” is the response I got from the receptionist.  “This”.  She took a copy.  The doctor’s response is next.  “Oh”  “This doesn’t pay very well.”   Interestingly enough, I don’t have to pay anything although I personally, signed up for a plan that had a 1250 deductible and 20 dollar co pay.  Not on medicaid you don’t pay anything.  Ok.  Then why the hesitation from the doctor’s office.  Oh I get it.  THEY don’t get paid.   Apparently they do not like the payments that they get.  Now we have it.  It’s not about YOU personally, just go get some other insurance so we can treat you differently.  And we can make more money.

Is this right?  I didn’t have a choice.  Due to my income the new plan charged me this much and they pay whatever their plan says.  However if you were already under an existing treatment through a doctor,, which of course I was, then they have to take you as a patient.

I am so sick and tired of all this cancer crap (even if its over) and going to the doctor and figuring out treatment; or not. I just want a new normal life.  Is that too much to ask?

Have a nice day.  i am going to go pull my hair out. 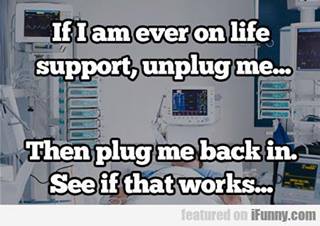 Breast Cancer survivor owned by one old Shelty and a 3 pound Yorkie named Mimzy!
View all posts by Bonnie →
This entry was posted in Uncategorized. Bookmark the permalink.